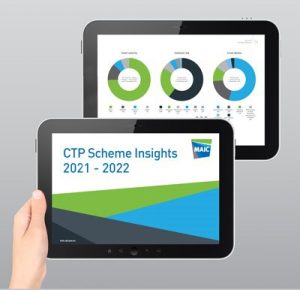 Compulsory third party (CTP) insurance in Queensland provides financial protection for motorists in the event of a motor vehicle crash. It also delivers fair and timely access to rehabilitation for people who are injured. It is conveniently bundled with vehicle registration to ensure that all registered Queensland motorists receive this important protection.

The Motor Accident Insurance Commission (MAIC) regulates CTP insurance in Queensland to ensure it meets these objectives. This year, MAIC continues to review and improve our adherence to our core objectives. Read on to learn more.

In the year ahead, we will:

The overall CTP insurance premium comprises levies and a fee that fund services for people who are injured in motor vehicle crashes. It also includes an insurer’s premium that is used to meet the expected costs of claims, as well as insurer expenses and profits for administering claims.

The market for CTP insurance in Queensland has four operators: Suncorp, Allianz, QBE and RACQ. The market has remained quite stable, with no specific notable changes by any individual insurer.

Motorists select their CTP insurer when they purchase a new or used vehicle through the motor dealer.

Some motorists elect to switch insurers during the term of their policies or when their policies are due for renewal. There has been an ongoing trend in motorists switching away from Allianz and QBE and moving to RACQ or Suncorp.

The efficiency of a CTP insurance scheme can be judged by how well insurer delivery costs are controlled while maximising the amount paid to benefit the person who was injured. We consider a minimum benchmark for our privately-underwritten scheme is for 60 per cent of CTP insurance premiums to be delivered as claimant benefits.

This year, the claimant benefit increased by 6 per cent compared to the previous 5-year average and reached a new high of 71 per cent. Correspondingly, delivery costs have further reduced by 6 per cent to a new low level of 29 per cent. We continue to see the increase in claimant benefit and decrease in delivery cost post the 2016 scheme review, mainly due to measures implemented to address persistently high insurer profits.

Our legislation requires insurers to deal with claims as quickly as possible, with insurers determining liability within 6 months of receiving a compliant claim. We continue to see a high level of timely resolution consistently achieving over 99 per cent. This data indicates that insurers and lawyers continue to work constructively together to resolve claims quickly.

We continue to monitor insurers’ legislative compliance and claims management practices, including claim durations and stages of settlement. Where variations exist between insurers, we are analysing the data and consulting with insurers to understand the reasons behind it. The duration of a claim can be influenced by injury severity, circumstances around liability, evidence gathering, and claims management approach.

Recent data show that insurers are settling older claims that tend to have a higher severity in injuries. This is causing the average claim duration to increase due to the length of time required to finalise these older and more complex claims.

The data shows that the proportion of claims settling prior to CC has decreased over the recent years. We are continuing to monitor the change in proportion of settled claims.

Facilitating fair and timely access to compensation and rehabilitation

In Queensland, CTP insurance enables people who are injured in vehicle crashes through no fault of their own to claim fair and timely compensation and access rehabilitation. The compensation paid to the person who was injured depends on the extent of their injuries resulting from the vehicle crash and how these injuries affect their work and social functioning.

In 2021–22, there has been an increase in average economic loss compensation payments as a result of larger claims being settled from older accident years.

Within the last two quarters, the Department of Transport and Main Roads data showed that traffic volume on Queensland roads is lower compared to its 2019 level. This is expected to be a contributing factor to the lower than expected number of new CTP insurance claims being lodged with insurers in the first half of 2022.

In 2021–22, the proportion of claims added per quarter has remained consistent to the 2020-21 year. Noting that more than 77 per cent of people who lodge claims engaged Queensland law firms to represent them, while approximately 20 per cent of people lodged their claims directly to the CTP insurer. This applied to the claim lodgement stage, however some people may later choose to be legally represented during the course of their claim.

During 2021–22, claims added per quarter were comparatively lower in the first two quarters of 2022. Overall, we continue to see fewer claims being lodged after the car crash scamming reforms were introduced.

The Nominal Defendant ensures that people involved in crashes with unidentified or uninsured vehicles still receive fair and timely access to compensation and rehabilitation.

Claimants by role in accidents involving an unidentified vehicle

The Nominal Defendant manages claims for various types of people, ranging from cyclists to drivers to pedestrians. As per previous years, most claims were lodged by a driver.

For claims involving an unidentified vehicle, 42.4 per cent of claimants were drivers.

Responding to many varied types of road users, crashes and traffic patterns

In 2021–22 most claims were lodged by people aged between 26 and 35. The second-largest cohort of people lodging claims was people aged from 36 to 45.

The data continues to demonstrate that the majority of crashes occur between 3pm and 6pm on weekdays. The likely cause is higher traffic volumes at peak periods for road travel.

Although fewer accidents occurred during the evening, the crashes that did occur were more likely to be more serious, particularly on weekends with the peak period being Saturdays between 12am and 3am.

Our data shows that majority of claims are of a minor severity, with 62.6 per cent of claims by drivers, and 54 per cent of the accidents occurring when vehicles are travelling in the same direction.

We continue to support initiatives led by the Department of Transport and Main Roads and Queensland Police Service to reduce distracted driving that can cause these types of collisions.

While head injuries make up a smaller percentage (10.9 per cent) of reported accidents, the severity level relative to the injury is high (8.09 per cent). The thorax continues to remain the most likely part of the body to be seriously injured at 11.96 per cent.

Vehicle classes continued to see a steady growth in the overall vehicle fleet from July 2021 to June 2022, with a growth of over 100,000.

Average road traffic flow, in comparison to corresponding months in 2019

Data sourced from the Department of Transport and Main Roads showed that the first quarter (January – March 2022) had a lower road traffic flow, which could be attributed to COVID-19 and the floods in Queensland during that period.

As reported last year, the historical trend in road usage has been used to understand the pattern that we see in claim numbers. We are continuing to observe and monitor any trends on CTP insurance claims.

Tip: Click the toggle buttons to switch on or off the corresponding trendlines.